Military families are familiar with worry. We know better than anyone in the world what it feels like to know that someone we love is far away and in danger, and that we are almost completely unable to protect them. Fortunately, there is one thing we can do to protect our loved ones no matter how far away they are or how long their deployments are. We have the power to keep vital information out of the hands of the enemy and therefore eliminate a risk to our family members.

The military calls this safeguarding of information Operational Security or OpSec for short.

U.S. service members are frequently warned to be careful what information they share online, because in the wrong hands, even seemingly innocuous details can give the enemy enough information to harm American troops or disrupt a mission. In a reported incident last year,the Israeli Defense Force had to cancel a planned raid because one of the soldiers involved shared his plans on Facebook. Although it may seem that only service members have access to sensitive information, civilian spouses can inadvertently put troops at risk and jeopardize missions with careless posting, too. We have access to more sensitive information than most of us realize: arrivals, departures, and flight itineraries for planes full of troops and their equipment; the size of our spouses’ units; their locations; and even their morale.

As a new generation of job-seekers is increasingly aware, nothing anyone posts anywhere on the internet is truly private, and privacy settings on Facebook, Twitter, and other platforms are not perfect (and frequently change). If you post it, someone can find it. As social media becomes a progressively larger part of daily life and an essential form of communication for many people, indiscreet posting can threaten not only your career prospects, but national security and the safety of your spouse.

When my husband was deployed, he only mentioned rocket attacks a day or two after the fact, and even then he never gave me any detail about where the rocket landed, how much damage it did, or whether anyone was injured; he pointed out that if the enemy were able to find out that the rocket hit a certain location, that might help them adjust their aim to hit something more vital the next time. Although I was theoretically the only one reading his email, he was constantly aware that he was in a combat zone and his internet access might not be as secure as it looked- so it was safest to assume that the enemy was reading every word. Family members should assume the same thing about internet connections both downrange and stateside; refrain from asking your deployed loved ones questions whose answers might be potentially dangerous, and be careful what you share in your own messages to other family members or friends. 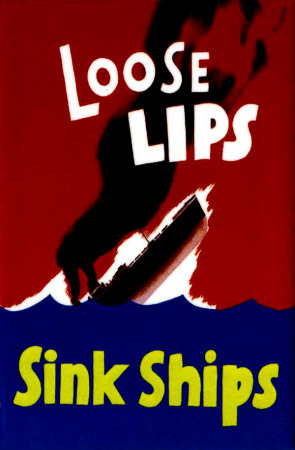 Offline Chatter
The original World War II “Loose Lips” message obviously did not refer to Facebook posts or Skype. The concern at the time was that troops or their families would reveal sensitive information to the wrong people, even accidentally by talking amongst themselves in places where someone might overhear. Despite the focus on online security risks, phone conversations and in-person chats can still give the enemy information which they can use to kill American troops. Remember that telephones, especially cordless phones and cell phones, are not always secure; treat phone conversations the same as you would treat email. Be careful what you say in a public area, and always be aware of who is nearby and potentially able to overhear information like where your spouse is and when his/her plane leaves.

As a rule, avoid:

Your loved one’s life and the lives of his/her fellow service members are in your hands.